Utopea is now in full release!

Visit the Utopea General Store to buy the book in your favorite format. 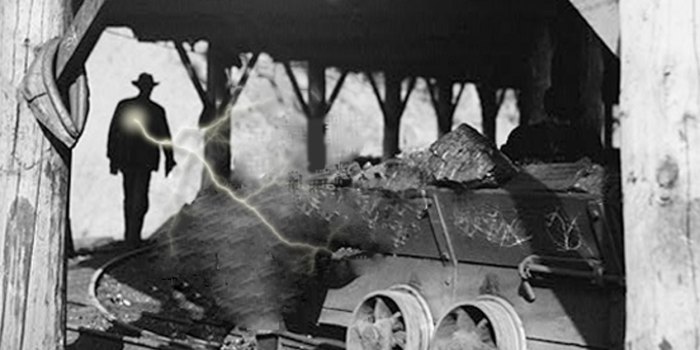 Ragatha May lay splayed out in the grass with an empty tobacco tin for a headstone and an outline of sticks for a casket. The girls raced each other to gather wildflowers from the fringes of the yard to decorate her grave. Meeting back at the little cloth corpse, they dumped their floral tributes and knelt to pray. Mary Maud had gotten as far as ‘dust to dust’ when a large square lump came barreling toward them from the woods. The raised mass broke through the grass as it reached the head of the doll’s resting place and the tobacco can popped heavenward like a soul on Resurrection Day. In its place lay a cemetery footstone inscribed with the name Thomas Thorne. The girls, who had fallen back on their behinds to scoot out of the way as the stone had hurtled toward them, giggled at the spirit’s joke.

“Gramma! Old Thom’s come to see you,” Lottie called out. The girls ran toward the house, Lottie turning back a short distance into her sprint to return and grab the doll.

“Hurry up, Lottie!” Mary Maud called impatiently from where she waited breathlessly. “We have to get the mirror!”

Eleanora and Martha had gone into the house the moment Old Thom’s arrival had been announced. As Lottie reached the porch, the two older women were gingerly carrying a large looking glass out of the parlor. They shuffled it to the end of porch, pausing at the first of the three steps down to the yard.

“Put that doll down, Lottie,” her grandmother said. “We need more hands to steady this so we don’t drop it on the stairs.”

“That would be immeasurably bad luck,” Martha warned. Both girls hurried to do as they were told. This was serious work, and it was only recently that either of them had been allowed to help with it. With great care, the mirror made it into the yard, where the women and girls worked together to cart it over the lumpy hillocks of grass to the silent gravestone. Eleanora looked up to see where the sun was and made a final adjustment to the position of the glass. It poured forth light onto the rock. As it did, the figure of Thomas Thorne appeared in the mirror.

“Good women of Utopea, how passes the time? Is it my hundredth deathday yet?”

Martha smiled at the handsome man in the looking glass. It was such a shame he was dead. He cut a dashing figure in his hunter green tailcoat and white and silver striped waist. Old Thom’s pants were worn snug, unlike the baggy fashions of Martha’s day which only served to hide a man’s flaws. Despite the impossibility of it, Martha had quite a crush on the ghost. If only they had lived in the same time, perhaps she could have ridden only one husband all the way to her own grave.

Eleanora stepped around to the other side of the headstone, careful not to cast her shadow into the sunlight illuminating it. She stood across from the mirror in a location where she could speak directly to the apparition. “Not yet, Thomas. You’ve got to wait until 1916, seven years from now.”

“That’s but a short nap for me,” he said, feeling about his waistcoat. “Forgive me for always asking, but they buried me without a timepiece.”

“It’s no trouble at all, Mr. Thorne,” Martha said, using his formal name in an attempt to keep her dancing heart from getting any more excited. “We may not know everything in Utopea, but we know what year it is.”

“Quite, quite. And speaking of not knowing everything, I regret to report that I know something you don’t, and it worries me,” Old Thom said. He stuck out a thumb to brush away a cobweb that was somehow on the inside surface of the mirror, giving thought to how he was going to break the disturbing news to the women. After a moment, he decided he just needed to spit it out. The looks on their faces clearly indicated they were not enjoying the suspense.

The women stared at the mirror; the girls peered at the women, waiting for their elders to explain how that could even be possible.

“But everyone has a knack,” Eleanora protested. “Surely he does too. Some people choose not to use theirs, you know.”

Old Thom shook his head. “No, it’s not like that. I felt it when he stepped on me. He’s not blessed with anything at all.”

In 1909, newspapers shaped the world, and Hector Browning was a newspaper man. He was a master at wordplay, a king of persuasion with the power of the press. The new century had dawned; it was time to turn a rustic people from their old ways, and more importantly, their homes. His assignment was simple: Get those people out of the hills. But Browning and his league of industrialists were about to run up against a different kind of power, one that didn't rely on ink and intimidation. Words would fail.
Loading Comments...